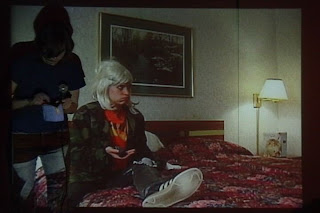 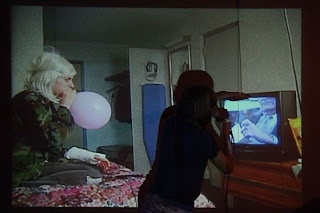 Wynne Greenwood
Location: Washington State, Brooklyn, NY and Los Angeles
How would you describe your art? Accessible abstraction through performance with video
Currently working on: ROOM with Tracy + the Plastics and Fawn Krieger, New Report with K8 Hardy, and Huge Days a tv series
Day job: Artist
Daily Inspirations: Making a cup of tea, breathing, looking at rocks and yards really close up, looking at the news

People & Artists you admire: My family, Cecilia Dougherty,Derrick Jensen, Frida Kahlo, the idea of the UN Superpower you would most like to possess: flying

This interview took place at the beginning of August 2005. All images and live stills reproduced with permission © Wynne Greenwood.

Hi Wynne, how are you? What are you up to at the moment?

I’m almost done with reading Harry Potter #5, and it's really taken up most of my time today when I should have been working on this essay I’m writing for my friend's magazine called ANP. I’m trying to prove that when we find the spaces of accessible abstraction that digital video offers, in the real world, then we will never elect a George Bush again.

How did you first become interested in, and develop your skills in video art?

In 6th grade we had to make a "demonstration" project, instructing the class on how to make something. My friend Chrissy and I used her family's video camera to make a talk-show about how to make a movie. I remember I could not stop cracking up when we tried to explain how to make a romance movie, as if flowers and boxes of chocolate were the most hilarious things on the planet. That was my first time ever using a video camera. I made a couple weird videos as a teenager borrowing friend’s parent's cameras, and then took a video class in college. I made it a point in every house I lived in after that to make an editing room, usually oddly enough in the closet.

To what degree is you artwork created with a feminist conscience?

Both really. We’re all having interactions together.

You have stated that you feel your total participation in the creation of culture includes ‘examinating, outlining, redefining, responding and responsing’.

Do you feel a responsibility to look at how culture is created, and actively look to revolutionise the ways and forms in which it is created, via your artwork?

Yes. There was a change that happened while I began and then continued touring with Tracy + the Plastics. It was like first I just had to say the word "stage" and "microphone" then I had to define those things. Then I had to define how I was using them.

You have claimed, ‘the nature of video demands manipulation, rule breaking and heresy’. Do you think therefore that there is such thing as trust and honesty in video art, is the subjectivity of video artists always going to create spaces that ’perform’, or ‘lie‘? Or does that miss the point of the ‘believable’ realities you wish to create and perform?

Even if you just set up a video camera on a tripod and push record randomly without making a decision about what's in front of the camera or when, you and the camera are making edits.

I am really intrigued by your comment that ‘there is a time to come out of the bedroom, out of the closet. I definitely feel like my work is in transition right now’.

Bringing your art out of the comfort, intimacy and familiarity of your bedroom, have you found that you have taken your art and your art making out of your initial comfort zone?

Well our bedrooms are not always our most comfortable or intimate places. There can be a lot of ignoring and hiding that goes on in that space.

In terms of transition, has bringing yourself and your art out of the bedroom: transitioning from ‘underground’ artist to the more recognized artist you are today, created a difference in your approaches to your art?

I read that you were quite against the use of digital video when you first started with projects for Tracy & The Plastics, but that ‘times change’. Have you found that the updating range of media, and working with the latest technologies yourself allows you to make cultural ‘responses’ that are appropriate and contemporary?

Yeah, but I think it's important not to just disregard old technologies, which have their own theories and ideas. That said, as a maker, I think it's necessary to know about the new tools of making.

You have in the past been keen on the notion of the collective act of Participation, whether it be your participation in the creation of culture; the audiences’ participation in the live shows via them viewing the videos; your views of paused video being a participatory act between video and viewer; or asking your audiences to be as present as you are, and be safe with you in the spaces you create.

To this extent, do you think art, and your art in particular, could exist without others (viewers) being part of it, collaborating with it, and participating in it?

Yeah but it would be a different animal.

Do you find you have to rely therefore on an assumption of your viewers’ creativity and engagement?

I know I can't rely on that - I think that's where I know I would do this with or without an audience. But I do believe anyone can do what I’m doing. We're all learning about stuff together, I’ve never "dumbed down" my work ever.

I am interested in visibility, and the spaces artists and individuals are allowed to occupy and own (especially female and queer individuals).

How interesting to you, within your work, is the notion of what it means to create, uncover and take up space, and to use it and occupy it?

I think we're all invested daily in creating safe, engaging, and inspiring spaces for ourselves to occupy. I’m really interested in how we can do that together.

You once spoke of how creating and editing a video is a deliberate process of choice.
Do you find this process empowering?

Extremely. For you, what is the most satisfying, and/or important aspect of creating your video art? Where it leads to next.
Posted by Colouring Outside The Lines at 23:47