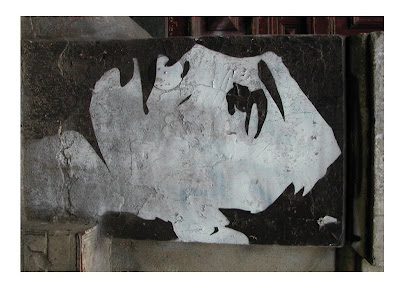 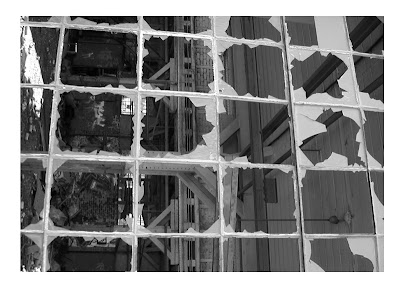 * How would you describe your art? Personal and reflective
* Currently working on: sending my new exhibition "Deconstructing Barriers" on a journey, a zine about Iceland and being able to afford a new camera :)
* Day job: I study Scandinavian languages, Finnish and English; my boyfriend, two friends and me recently opened a shop with records, crafts, books, zines and a vegan café (www.craftista.org); I spend two days a week working as a translator and researcher for a TV channel
* 3 Likes: books, hugs, coffee and so much more
* 3 Dislikes: stupid people and more than I can think of right now
* Daily Inspirations: everything around me!
* People & artists you admire: Leslie Feinberg, June Jordan, Matthew Barney, Margaret Cho, Tori Amos and many, many more
* Favourite album(s) to listen to when working: changes every day... at the moment I like the new Ted Leo album, "Heartwork" by Carcass and "Under the pink" by Tori Amos

This interview took place in March 2007. It was initially written for inclusion in The LadyPress, the official newspaper of Ladyfest Leeds.
It has been adapted for inclusion in this zine. All artwork printed with permission from Elena ©
- - -
Hi Elena, How are you?
I am tired, but fine. Thanks for asking! :)
Three of your photograph exhibitions are being shown at Ladyfest Leeds this spring. Why are you interested in showing your work at specific feminist events such as Ladyfest?
My photographs have been exhibited at various Ladyfests before and I consider them a safe space to show my work because some of my pictures are very personal and intimate and I don't want to provide them to an environment that would make me feel uncomfortable.
I am aware that your photography exhibitions have never been shown in the UK before. Where else have your works been exhibited? What do you hope exhibiting them in the UK will bring?
I have had several exhibitions at Ladyfests, i.e. in Nuremburg and Toulouse. "Street // Art" has been shown at the Trainspotting Festival, the Kafe Kunst Fest in Munich and at the university of Kaiserslautern last year, as well as during the Queer Fest in Rome. A few of my prints were exhibited at the Tiger Lily Café in New York and then auctioned as a benefit for Take Back The News (www.takebackthenews.org). Well, I never exhibited in the UK before and I am just curious what it will bring. Also, I am really looking forward to any kind of reaction because this is the first time there will be a discussion / workshop after the exhibition.
When did you first become interested, and gain your skills in photography?
Hmm, I can't really say. I have always taken pictures and I carry a camera with me most of the time. First, I only took pictures at shows. Then I started to walk around the city with my camera whenever I had the chance to. As far as “skills” go, I have never learned how to take pictures. So I am definitely not a professional in what I do. I just love doing it, that’s all..
As part of the exhibit at the aforementioned Ladyfest there is going to be a discussion group / mini-workshop where visitors can talk about your photographs and any issues they have raised. How important to you is the idea of your work being discussed and people talking about their direct reactions towards artwork, and your work in particular?
It's very important to me because normally, it just doesn't happen. People look at the pictures and leave. I don’t get any direct reactions to my work, except from people who know me. And the same thing happens when I go to an exhibition myself. I even started to take notes because I tend to forget all the details. That's also why I give my photographs away for free. I want people to take a part of the exhibition with them.
Your exhibition "Street // Art" concentrates on everyday sights, and the things that surround us on a day-to-day basis yet often remain unnoticed. What specific things do the photographs show? Where did the ideas for these photographs come from?
The photographs show political statements, ornaments, beautiful things or people and much more. They were taken in different cities, namely Barcelona, Berlin, Prague and Reykjavík. Most of them show stencils but also cut-out images and stickers. These are the things we often tend to ignore or overlook while walking around. I guess that’s mainly because we think we are already familiar with the environment or we just have so many thoughts in our heads that we forget our surroundings. Since I am intrigued with the idea of the flâneuse/flâneur, I love to walk around wakefully, even if that’s not always an easy thing to do. Those small treasures make me smile, i.e. when I went for a walk in Reykjavík last year and felt a bit lonely because I had been on my own for a week. Then I saw a stencil saying “Eat pussy, not animals” and burst out laughing. Basically, I am trying to show how these small pieces of art are able to make a change.
I am hugely interested in your idea that awareness and observance of such everyday objects, situations, and points of beauty have the ability to make each of us a "cultural producer". What do you specifically mean by this?
Oh, actually I meant that the making of street art itself is a form of cultural production. The idea I want to get across is not only observing such forms of art but being able to produce them. Street art is a form of art that is not supposed to be there. That's why I think it is so interesting and so important. Art in general has become so conventional and restricted. I see a lack of personal experience and sharing of thoughts in a lot of art forms and that is definitely something I miss a lot. Street art is able to give a voice to those who are often ignored (or want to be ignored) by mainstream audiences. It takes back the right to visibility and also shows the importance of taking control over things that have been taken away, i.e. one's opinion, one's right to be heard, one's body, etc. There is no filter or censorship involved. The same goes for zines and other forms of independent / DIY art.
But of course looking at street art is a form of cultural production, too, in case the things we see move us or make us think or maybe even give us a little push to produce something ourselves (whether that is street art, a zine, a painting, a photograph or any other form of art).

Reflecting on the above question, do you believe that we *all* have the potential to be cultural producers on an everyday level?
Of course! I also believe that everybody is an artist in one way or another. We are only taught that we aren't able to do certain things, i.e. that we are not able to be creative or that we don’t have “talent” for this or that. And unfortunately, that makes us think: “Oh, if I don’t have the talent/skills to do that anyway, why should I even try?”
How important do you think it is to encourage and empower us all to believe in our own creative abilities and potentials?
Very important! As I already said, everybody can do something! Whether the outcome is “good” or “bad” is only a matter of opinion anyway..
Another of your exhibitions, Suada, focuses on the beauty of small objects and details. What does the word "Suada" translate as?
"Suada" is derived from Latin and means "stream of words" or "tirade". Those pictures tell a story, namely what influenced or moved me during the months when the exhibition was put together. It also means that I am trying to create a dialog between me and the people who look at the exhibition, even if I am not there “physically”.
Do you find that being able to find the beauty in small things enables us to put our own lives into perspective - in terms of being able to remember our own individual existences and what they can mean in the grand scheme of things?
Definitely. Sometimes I get the feeling that people tend to be so obsessed with problems and worries that they forget what it feels like to appreciate small things. I am not saying that people's problems and worries are not important! But sometimes, when I start to complain about my job or university or any other kinds of obligations, I try to remind myself of something beautiful or something I love, like a cup of coffee, a book, a zine, a kiss, a hug and so on.
Well, I guess I am so happy and excited about those small things in life because I have had breast surgery twice (benign tumors in both breasts). After the first one, I developed PTSD (post-traumatic stress disorder) and hypochondria. I was worried and scared all the time and I don’t even want to know where I would be now if I hadn’t started psychotherapy. Now I wake up every morning and I’m just happy to be alive and I sometimes feel like a child again… :)
You have stated that "Suada" also deals with other things that you were experiencing, thinking about, or dealing with at the time the photographs were taken. You specifically mention the notion of gender as a construct that can be played with. How important do you think it is that art, and specifically *your* artwork takes politically important issues such as gender constructs as a theme, or a focus?
I believe that art itself already takes politically important issues as a theme – consciously or unconsciously. But maybe my definition of politics is pretty diversified. I could at least find something political in most of the things I see. For me personally, the personal is political and I am trying to involve political awareness in all of the pictures I take.
How does "Suada" approach this?
“Suada” tells a story about a lot of things that moved me during a certain time of my life. It tells something about the artificiality of categories such as “sex” and “gender” (there is a picture of me with a moustache, womyn with suits on a coffee ad in Tokyo, etc.). It talks about sad moments, like the day we visited the Jewish museum in Berlin or the Jewish cemetery in Prague. It tells about travelling Japan and all the things I learned about life there. It recapitulates how Iceland’s landscape made me question myself. And it tells you about gestures, smiles, light, broken glass, the sky and so on.

Posted by Colouring Outside The Lines at 21:39