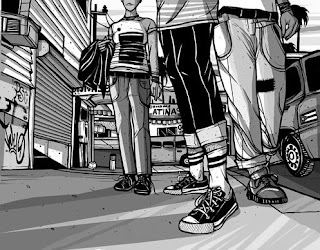 * How would you describe your art? Drawings of awesome folks breaking rules.

* Currently working on: INDESTRUCTIBLE, my illustrated novel, and lots of record covers and stuff for other people's magazines/books/etc. Also, a dope-ass release party for INDESTRUCTIBLE

* Day job: I’m an illustrator all the time

* 3 Dislikes: Loser "radical" types who think they’re all-that cause they can bust out with some key words, but still fuck up repeatedly (aka, get all bent out of shape when you call ‘em out on their shit.), gold chains, and walking behind real slow people on the subway.

This interview took place at the beginning of March, 2006. All images are reproduced from Cristy’s webpage (http://www.croadcore.org/) with permission. © C.Road

- - -
Hi Cristy, how are you?
I’m being snowed-in in Philadelphia and unable to leave the house. Although, its dope as hell cause I’m surrounded by rad folks.

When did you first begin drawing? Is it something you’ve always done?
Yes- I’ve been drawing since I was in kindergarten. I specifically liked drawing dolphins and naked people. Unfortunately, I don’t like to draw dolphins anymore.

Of your illustrations you have stated: ‘they aren’t supposed to be representative of an ideal community – they’re drawings of people who I happen to know – those who inspire me’. What are your favourite things to draw and depict about such people?
I like to romanticize and illustrate situations and ideas that are deemed, otherwise by mainstream culture, as imperfect, or wrong even. I think these are the taboos that make us revolutionary. I like to draw things like women behaving badly and oppressed folks rising up, you know? I like to, even in the saddest picture I’ll draw, depict some kind of notion of fighting that negativity. It all depends on what I’m working towards. However, I ultimately like to let imperfections shine.

Kimberly Mitchell in your zine, Greenzine#13, wrote: ‘what also bothered me in the back of my mind was that all these things that had affected me and changed me in huge ways – ‘zine culture, punk, riot grrrl, feminism – weren’t accessible to Elizabeth.’
These influences are all similar themes that you depict in your illustrations (as evidenced by titles such as, ‘freedom’, ‘activate’, ‘knowledge or bust’, ‘this was my revolution’ etc.) How important to you is crediting your own ‘progressive’ cultural influences, wearing them on your sleeve, and making the awareness of them accessible to others?
I think keeping alternative culture to myself is counterproductive- those are things that gave me any ounce of courage, so I like to write about them and make drawings about them and submit to projects that admire them or are related to them. So it is pretty important for me to keep it real to where I’m coming from.

You once wrote that: ‘I’m a woman, and women are taught vulnerability. Women are taught compassion and compromise’.
In what ways do you feel the fierce enigmas, the strong and powerful women you draw, challenge this claim?
I think, for me, it was pretty important to unlearn that vulnerability and weakness, so I get inspired by others who are equally eager to unlearn it and be defiant. I think that since I’m an illustrator, I’m gonna try real hard to depict that in several ways, but clearly- so it all depends on what I’m drawing u know? Sorry I don’t really know how to answer this question! just cause I think that that depiction of strength is displayed in a million ways (women fighting, women ripping out hearts, women being sexual and it being okay, etc)

You have written that: ‘friends often blamed me for spending large bouts of energy towards idealizing any constant that engages me through art and stories. But the truth was that I only wanted to record the emotions that make me stronger – I realised my life was this enthusiasm or nothing at all.’
I think there’s a really fine line regarding looking after one’s mental health and devoting time to one’s creative and collective contributions. I find there’s a conflict between spending energy looking after oneself, and spending energy on creative/community commitments that are important to us – and thus issues of burnout arise which make us feel worse. And conversely creative involvement and engagement making us feel positive and involved, and thus feel better about ourselves.
How have you personally managed to find a balance between the two: burnout and involvement?
I pretty much burned out in a lot of cases already. For instance, a lot of local activism that was centralized around the punk subculture I was coming from was killing me because I had to deal with so much sexism and racism that wasn’t being dealt with in this predominantly white boy community. And I love punk rock- but right now, it’s more of an art thing, and a respectful individual thing, as oppose to a respectful community thing. I feel like the radical groups I want to be involved with and support is less subcultural and more broad (Like INCITE Women of color against violence, and Spead magazine: Illuminating the sex industry, and Sista II Sista)- But honestly, my burnout and time lapse of depression has just resulted in a large focus on my novels. I really want to write stories and make art and make it accessible to all kinds of people- the friends who are punk and the friends who aren’t and people and communities I’ve never met before, you know? Making art and writing is a crutch for me and I can hardly function without that ability.

You invest your whole self and your whole life into your pictures. Do you find the process exposing?
Kind of- but in a way I like that.

Your artwork has appeared in a lot of different places recently, from the cover of the Things To Make & Do book, to magazines such as Bust and Bitch (alongside other places). Do you enjoy creating for others’ ventures as much as drawing for your own zines and publications?
Yeah, its my profession, pretty much. I like to publish my own books and I like to make art for myself, but I’m an illustrator- and if someone thinks I can illustrate their idea, then I should at least try to.

You have travelled and moved around a lot in the past. Do you view your drawing as a constant, something that you can rely upon having when you’re in constant flux?
Is it useful to be able to use your art as a document of where you’ve been and what you’ve seen?
Yeah totally- I think that I like to display how I learn through experience, as oppose to learning from reading a book or going to school. And I think that I’ve, so far, used my art/writing to talk about those experiences. It’s pretty dull to learn a concept from reading something, and then writing about it, or making art about it, all over again, you know? The art that interests me the most is also autobiographical. ‘Cause I want to learn of people's lives, not just what they learned in school.
What do you find most satisfying about being an artist?
Right now its that I make up my own schedule and I can eat food and smoke pot while I work. Hahahah. But with sincerity- Its really rewarding that I can show an idea through a picture and let a broad range of people understand it. That’s why I loved illustration in the first place- I don’t like art, or writing, that is alienating to people who aren’t artists or writers. I think ideas should be accessible and I’m really happy that I get to display ideas in ways that people can understand.

Posted by Colouring Outside The Lines at 20:29