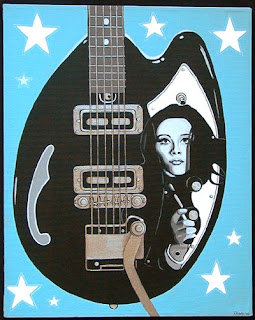 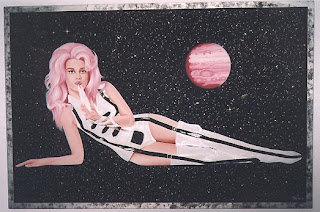 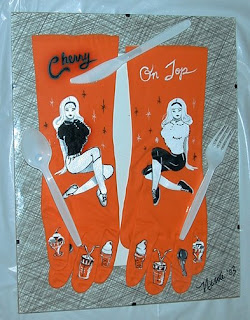 * How would you describe your art?: Glam feminist popart

* Daily Inspirations: The mountains outside my window.

This interview with Nicole took place in April 2006. All images reproduced with permission © Nicole and the PopTarts

Hi Nicole, How are you?
I’m good! and busy.... Working on securing the use of images of artwork for a new lowbrow and pop underground art documentary project I’ve been working on with my partner Marcus Rogers," The Lowdown on Lowbrow". It includes artists Robt. Williams, The Pizz, Anthony Ausgang, SHAG, Isabel Samaras, Lisa Petrucci, I, Braineater,12 Midnite, Dirty Donny, The PopTarts and others.
Your work is packed with fantastic uses of glamour icons, comic book heroines, b-movie dames, movie queens, pin up girls, villainesses, fetish femmes and female musicians. What inspires your use of particular muses or subjects - How you decide who to depict?
I generally choose real women or female icons that have inspired me from a very young age. Everyone from old film noir actresses that I would watch on TV late at night to characters out of comic books to female musicians that have blazed a trail such as Wanda Jackson or Nina Hagen. I’ve tended to gravitate towards using women that already have a strong image and identity and have become somewhat legendary. The idea of "glamour" which is all about allure and enticement, some kind of spell...it’s such a fabrication but so ingrained in our society now that it is almost synonymous with being female or feminine.
Your paintings have been created on (or of) various “alternative” canvasses such as on bowling pins, rubber gloves, and guitars; thus taking the very idea of the importance of popular culture in art to the next level, by using it as art, and incorporating the everyday, the popular, into art and thus the everyday becomes art.
Using the rubber gloves came from an idea for a show about visual puns, and I came up with "Dirty Dishes" pinup style dancers on rubber gloves...and it took off from there. Painting on the gloves is very funny to me, on so many levels there are "sexual' connotations... but its also something subversive ... like women’s domestic work gloves are no longer used for the original purpose, they are now fetish items or relics. I’ve done many, many pairs now and do different themed ones and even do commissions.I play guitar and love old vintage electric guitars, I couldn't actually afford to own some of these collectibles so instead I just paint pictures of the guitars and I adorn them with female icons that suit the aesthetic of the particular brand be it Gretsch hollow body or a Telecaster.

Posted by Colouring Outside The Lines at 01:29