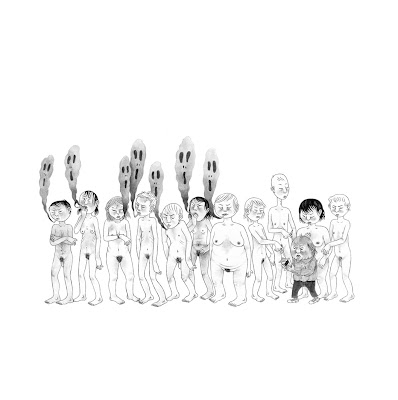 Geneviève Castrée
* Location: I live in Anacortes, Washington, though I am originally from Montréal, Canada.

* How would you describe your art? Worried, hoping to graduate to "tough love".
* Currently working on: Two small projects with a Swiss publisher called "Drozophile".
* Day job: I have none, but I do draw about twelve hours a day (when home).
* 3 Likes: Cooking well; Eating well; Sleeping well.
* 3 Dislikes: Depending on the food available at gas stations; feeling malnourished; getting less than seven hours of sleep.
* Daily Inspirations: Quality radio programming (I do not mean music.)
* People & artists you admire: Jane Jacobs, Gee Vaucher, small stubborn independent groups of people who succeed in making beautiful and meaningful things without selling their soul to the devil. Many of my friends.
* Favourite album(s) to listen to when working: Right now it is all of Gurdjieff's work and "Fire Inside my HAT" by Reiko Kudo, even though I prefer instrumental these days.
http://www.opaon.ca/
- - -
This interview took place in January 2007.All images reproduced with permission © G. Castree.

Posted by Colouring Outside The Lines at 20:19