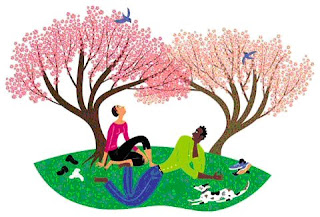 How would you describe your art? I try not to do that.

Currently working on: No comics at present. I've been working at drawing from nature, mostly botanical stuff. I'm really rusty at doing representational art of any sort so it's kind of humbling doing cruddy drawing after cruddy drawing. I originally got fascinated by fungi growing in the woods last winter and now have become interested in wildflowers.

- - -
What made you want to be an artist?
I can't remember not wanting to be one.

Do you find that despite moving away from fine arts you still utilize the skills and techniques and disciplines it ‘taught’ you within your current art work?
To some extent, yes.

How important do you think a taught art background is in terms of potential “success”?
It was certainly helpful to me, but I can't speak for others. I would imagine it's different for different artists. My background was in design, though, mostly, not fine arts.

Are you still splitting your time between working as an illustrator and being a comics artist?
I'm not currently making comics.

I once read you state that, ‘I do my for-money work as an illustrator and I have to be ridiculously careful of what I draw, so, for me, comics are mind-boggling because I can say anything I want’ Do you find it frustrating that, in terms of financial viability, you have to devote so much of your time to creating art that is ‘careful’, thus less liberating and true to you personally?
Not as long as I have other means of expression.

Despite my question above, is there a freedom in illustrating for others; taking the emphasis & pressures off always having to express yourself within your art?
Yes. But I don't see it as being so black and white. I like working as an illustrator and that work informs my comic work and vice versa. I do like having more than one thing going, though. Doing all comics is very boring and doing all illustration is pretty stifling. And that's another point. Comics is about 1/100th expression and 99/100ths drudgery. I mean, I love to draw, but comics is A LOT of drawing, and you often draw the same things over and over and it can get quite tedious.

What common techniques do you use in your illustration work, and what differences do you think there are between your illustration work and comic book work, in terms of style and appearance?
Really, they're as different as night and day. They serve two different functions and their appearance illustrates that rather nicely I think. The art for the comics is part of the story so it's quite representational and very narrative. The illustrations are kind of eye candy. Their main function is to break up the grey space of the page and to tease the reader into the story. And because the illustration I do is for mostly for fairly light, "lifestyle" type stories those images are more fanciful and stylized.

One thing that sets you apart from a lot of the other artists I have interviewed is that your artwork appears to develop from a very different ‘place’ than just either reality or imagination. To say that your art recognizes a link to personal expression doesn’t quite hit what your work achieves. I have read you speak of your cartoons being a ‘channelling’ process, whereby, ‘the story’s there. It declares itself and how it wants to be written’. This very much reminds me of the song writing singer, Kristin Hersh does. In an interview, she once explained it as,
‘I would never sit down to write a song. I have no idea what songs are and how to write them. I just get them stuck in my head. I hate to sound wacky but they just build up, and they get louder and louder. I’m always surprised by what they make me say’. In terms of this, how easy or difficult is it for you to control or plan your artistic output?
In terms of comics, impossible. If there's no story wanting to be written then I have nothing to work on. But part of why I'm drawing from life these days is because I'm feeling quite bored with expressing myself. When I first started doing the comics, I found everything about my life REALLY fascinating, but now I'm kind of interested in exploring "other". And I don't need the same kind of "fuel" for these drawings. I don’t have to "think up" something. The inspiration is right there before me! It's very refreshing.

In an extension of the above question, your artwork at the same time though does focus a lot on personal expression and personal experience. It is not detached from you, physically, as much as the description of ‘channelling’ would explain. I have heard you, especially in reference to your graphic novel, Daddy’s Girl, say ‘I had this material that I needed to get out of me’. To what extent do you see comics, and your experiences of fine art, as a ‘tool’ that recognised and realized your needs for self expression and exploration?
I don't know that I'd say that comics recognized anything, but it certainly was the perfect medium for Daddy's Girl. I think part of making any kind of art is knowing what's the best way of delivering the goods.

I once read you state that you could never have made comics had you not gone into therapy, as it gave you the perspective to see yourself and the world around you ‘without illusion’. Is this why your comics are so achingly true, because you have seen the world without illusion and for what it is, and it makes sense for you to depict that in your work, as to not fool, or spoon-feed your audience?
I try very hard not to think too much about what I'm doing, creatively. It kind of kills it for me. I sure tried to create a world that was as honest and illusion-free as I could, in my comics, but I have to wonder how possible is that? Everyone thinks they see the world without illusion, so I'm thinking I'm as guilty as anyone else of, well, having illusions about what I see!

Do you think this demands an element of insight and open-mindedness from your audience?
I doubt it. They just have to have some part of themselves that resonates with some part of what I'm doing. Sometimes I'm amazed at what people relate to in my work. It's often something that I don't even see or am aware of existing at all! Often it seems to be what seems to me to be an altered or skewed vision of what I think I'm presenting.

Kinda linked to the above question is a quote I read that claims, ‘Art is an avenue to solutions and understanding that we wouldn’t have gotten any other way.’ Do you personally think, in the absence of therapy, or as a continuation of day-to-day therapeutic intervention, art production has the potential to be a useful ‘avenue’ in this sense? i.e. How important do you think creativity is in order to survive and succeed?
I think creativity is utterly important---for everyone--not just ”creative types". And maybe calling it creativity is misleading, making it sound like it's something only for people in the arts. It's a way of being open to possibilities, to everything, and of asking questions about everything. Being creative is about approaching anything, art, accounting, cooking, your past and your life, whatever, with a totally open mind (and maybe heart, too). And if I ever made it sound like the reason I do art is to do therapy or to work things out, I totally misspoke! I don't really do art because it's useful. I do it because I must, because it feels good, because that's the place I feel most at home.

I first stumbled across your artwork via the insert artwork for the Eels album Electro Shock Blues. There is something about the starkness and lyrical content of that album that, for me, fits perfectly with the ethos and simple, often cruel truth of your work. Your artwork within the insert captures visually the aural intensity. How did this artwork come about?
E was interested in my comics and the other artists in the insert. The art director called and asked to use existing artwork, which is what that was. I think E actually wanted that particular image, if I remember correctly.

You once claimed that you felt the Comics format (despite the comedic suggestions implied by its name) is a ‘great place for hard topics [such as your tackling of child abuse, and other serious issues] because comics are so much the bastard children of the arts that no one cares what lines get crossed’. Do you think that this liberal attitude towards a lack of censorship, and towards who can create and produce ‘anything’ within this genre and format has allowed female artists more opportunity for gravitas, and more opportunity to explore and communicate their lived lives?
Well, maybe. You could also say that women are (some of) the bastard children of society already, so our work tends not to be taken as seriously already. The nice thing about doing it in comics is that it's not as carefully scrutinized because most of the world doesn't even know these comics exist. I guess you'd have to ask other women in comics if it's given them more opportunity to explore and communicate. I didn't consciously pick the medium because of its marginalization, I chose it because it was the right medium for me to do what I needed to do.

In terms of technique, once you have captured your initial sketches on paper, everything else happens on your computer. What benefits does the use of computer technology lend your artwork?
I did all the drawing for my comics on paper and then scanned the art to colour and refine on the computer. My illustrations are sketched out, usually, on paper and then drawn on the computer in a program called Illustrator. Lately, though, I've been working on paper more. The main reason I went to the computer was that, at the time, the paints I liked to use had substances in them that I was allergic to. But now they're using less toxic stuff and I can use paint again, so
I'm finding that that's where I want to be. But the computer has some real advantages, especially if you’re working for print. You can rework stuff more easily. It's easier to store disks than artwork. It's easier to send disks than paper.

There are many artists and comic book artists who demonise digitalised, computerised techniques as a sell-out, or as being less ‘skilled’. How would you counter this stance?
I wouldn't. Everyone's entitled to their opinion.

What for you are the most satisfying aspects of being an artist?
It feels like home to me.
Posted by Colouring Outside The Lines at 23:11