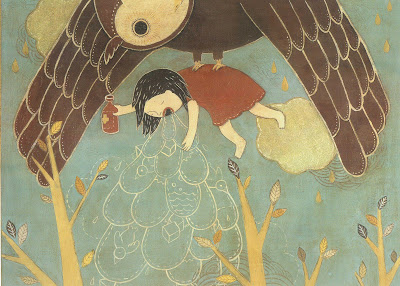 
Location: I currently live in Louisville, KY, but the previous 6 years I lived in L.A.

How would you describe your art?: My paintings are like an excerpt from a forgotten children's book... Personal tales buried beneath folk tales.

Currently working on: Paintings for a show in LA. A comic book inspired by film noir and the American south. Also adapting an Eskimo folk tale to comic form.

Day job: My income comes from gallery shows, random illustration jobs, anything from working in a vintage clothing store to other odd art jobs.

3 Dislikes: pain of loved ones, self doubt & imaginary limitations

Daily Inspirations: driving in the country listening to oldies & stories told by my
father.

This interview took place with Kathleen at the end of April 2005. All images reproduced with kind permission © Kathleen Lolley.

When did you first discover your interest in art?
Since I was four

From the Bio on your website, I read that one of your influences is Folk Art, the influence of which I think can be clearly seen in your work. How did you become interested in folk art, and how important do you think it is to include and represent traditional art forms like that in contemporary art work?
I feel a strong connection to folk art and outsider art. A reflection of everyday life & the personal are at the root of most of my paintings. For me, tradition & history gives work a sense of place & time.... adds story to an image.

You’ve got a solo show of your artwork going on at the moment at Kopilot in Louisville, KY. How is that going?
I was received well, the best show I’ve ever had.

How do solo shows differ from group shows for you personally?
I enjoy them both. I like creating a world of my own on the gallery walls, but it is also refreshing to collaborate with someone, especially when you can build on one another’s ideas.

I think its very interesting that you’re exhibiting at Kopilot, as from checking out their website, I see they’re a store rather than a conventional gallery. Was this a conscious decision to exhibit here, as an alternative to a conventional gallery (especially as I see you’re holding a similar show at another store, Kaviar & Kind, in May)?
Yes, Stores are good because I also make crafts & comics that I like to sell sometimes. Plus, it is a less sterile space & it often gets a lot of foot traffic. When I walked into Kopilot (and Kaviar & Kind) I felt that my art already had a home there, I had an instant connection. I could picture my art on those walls.

Do you feel that such independently owned stores, spaces & settings are more suited/more fitting for your independent & alternative artwork?
Yes, plus the connection with the curator/ storeowner is important. It helps to share a vision.

What are your thoughts on the conventional ‘high art’ world, and gallery spaces?
Sometimes it’s good, sometimes it’s bad, but mostly it is sterile. Personally, I feel nothing when I walk into those places. To me, feeling nothing is worse than hating something.

The Kopiolt show has been billed ‘The gentle works of Kathleen Lolley’. What are your thoughts on the word ‘gentle’ as a descriptor of your art, do you see your work, presentation and subjects as ‘gentle’?
I think gentle is one word, out of many, to describe my work. I think I use gentle to fool you, at first glace it appears gentle or light hearted, but once you’ve spent a few moments with it, you realize the subject matter has depth & to some degree, darkness.

Do you find traditionally ‘feminine’ terminology such as gentle (or for that matter ‘playful’, ‘cute’ or ‘pretty’) restrictive from your position of a female artist, or are such feminine ideologies something you hope to embrace in your art?
I don’t mind if some people describe my art as feminine, as long as that isn’t the only description. ..my art is so many things, If some one describes my art as just pretty, it means they weren’t really paying attention to it. I try to convey both masculine & feminine qualities to my characters. Actually I was worried about this issue in the beginning of my art career, I wanted both men/women/straight or gay to connect with my art, so I only drew figures without hair or genitals.... sometimes they’d have nipples..... now I’m not so worried, I’ve loosened up, I don’t try to hide the sexual nature of the characters anymore.

Expanding this question, do you think it is important for female artists to challenge the confines and aesthetics of words & styling such as ‘gentle’ in order to re-construct and re-interpret traditionally ‘female’ art-forms, such as ‘gentle’ or ‘feminine’ forms, from a modern female standpoint?
I think it’s important not to be boxed in or stereotyped.... but I don’t feel trapped by these words.

You often combine natural and urban landscapes in your artwork. Do you think your current environment, as well as the environment in which you grow up influences this subject matter?
Hell yes. Kentucky is a mix of green trees & old buildings. I think it’s important to draw what you know/ love/ feel/ experience everyday. The portraying of environment connects me and this land together and thus to it’s people. ...And I feel I’m preserving a certain time & place... a personal documentation of our times. ....

Do you see art, and your art in particular, as a medium through which you can comment on society, culture, and politics inherent in the two?
Yes.-feelings/ emotions/place are important in my work. Those are directly affected by society & culture. You work in many mediums, whether pen & ink, painting, illustration or animation.

How important is it to you that your creative output be varied and flexible?
I use what is available to me & try not to have limitations on what I can or cannot use.

You have a degree in experimental animation. Do you find having art qualifications has helped you be respected as an artist, or do you think that other aspects such as reputation, persistence or a healthy portfolio are more crucial to burgeoning female artists wanting to be successful in art?
I don’t think having a degree has particularly helped me, I’m pretty sure it has been portfolio & persistence.... and a lot of passion about what I do. I try to eat/sleep/breath art & writing.

Some of your paintings & illustrations have been described as: ’Two-dimensional figures painted on old parchment paper appear to be a part of a complex story- as if the characters escaped the pages that bound them.’
As well as: ’This exhibit will include paintings on found objects, book pages and toys. Each piece is meant to tell a story, usually about drinking and being lost in the woods, but also captures small moments unexplainable through words.’
I love the imagery that this conjures. Do you find that the varied materials and mediums that you work with allow you the freedoms to explore different ‘stories’ with your art?
Yes the mediums & methods I use help.... I play & explore with ideas like a child, then I refine & work like an adult.

How important is the role of ‘story telling’ in your artwork, especially since you have previously stated influences on your art that include folk tales, poetry, comics and old books?
Stories are as old as the hills & present in every culture through out time. The act of story telling connects us to each other, entertains & teaches us... so of course I think it’s important. I am fascinated with being able to tell a story with one painting in a gallery, but having it fit as a whole, in a show. (Telling a bigger & greater story). One painting can exist together & apart from the others. Paintings are kinda like children, you nurture them together, watch them grow & build off one another, then send them out into the world on their own, eventually separated from their family, taking on a different life of their own in someone else’s home. (Enriching someone else’s life in a totally different way). Does that make sense? I hope that came out right.

What fascinates you most, and fires your imagination?
Music & the people around me are fodder for visual imagery. I love hearing people’s day-to-day stories. I love hearing them conveyed in a song. I love the imagery a good song or poem conjures.

Do you think imagination holds an important place in ‘art’?
Hell yes, again. But I’m not sure how to answer the question with out rambling on & on.

I noticed that you have an image in the ‘1 second film project’. Could you explain your involvement in this project?
I went to school with the fellow who is behind that whole thing. I got involved because I like the idea that no matter how small your idea is, it can grow way out of control if you nurse it & never stop believing in it. So many people thought it was a bad idea & even protested it, but Nirvan didn’t care, he did it (is still doing it) anyway.

You have created a handful of short films as well as your more static artwork, and have worked on various commercial animations. How do you find that all your various artistic forms and settings (commercial andindependent) compliment each other? Do you find that techniques and lessons you have learned working on animation transferable to your other artwork (and visa versa)?
I love sequential art. And working in animation teaches you to be patient.

What about your work gives you the most satisfaction?
When I make art, my soul feels less constipated. I have so many ideas swirling around up there, they have to come out sometime. I have always been driven by my imagination, it’s often overwhelming, but it gives me a deep sense of purpose.

I leave you with a quote from a favourite author of mine: Anais Nin:
“My ideas usually come not at my desk writing but in the midst of living”.
Posted by Colouring Outside The Lines at 21:18