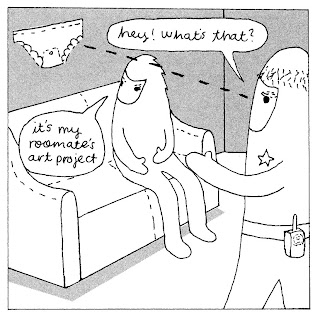 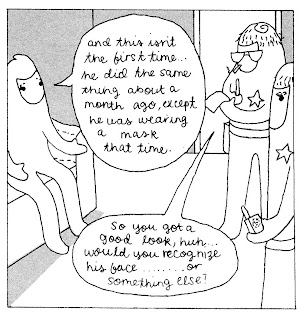 Location: Providence, Rhode Island. USA
How would you describe your art?: Minimal? Quiet?
Currently working on: A million different things
Day job: Freelance Designer, Illustrator, Waitress.
3 Likes: Music. Tequilla. Listening to music and drinking tequila.
3 Dislikes: George W. Bush, George W. Bush, George W. Bush.
Daily Inspirations: Music, my cat roxy, my boyfriend Eric, comics, books.
People & Artists you admire: John Porcellino, Julie Doucet, Gary Panter, Ron Rege jr., my family, my friends....
Superpower you would most like to possess: I don't know if this counts as a superpower, but I have always dreamed of having the powers of Samantha from Bewitched...
http://www.comicsoflove.com/
- - -

Your skills and art have been commissioned for many projects, including designing logos for companies. With such commissioned projects, is it easier to work to other people’s deadlines and specifications, or do you find this aspect, coming from a background of independent publishing, frustrating or restrictive to your creativity?
No, it is not frustrating at all. Sometimes it is a relief for someone to tell me what to draw and how to draw it! I enjoy working within constraints; sometimes some really interesting things can come of it.
What skills and knowledge gained from your degree (in printmaking) do you still find most useful in your day-to-day art production?
I find that I approach everything in layers. When I draw or paint, I put down the solid colour first then build on top of it, like screen printing. I love repeating and drawing the same thing over and over again. I also approach everything from the standpoint of mass production. And when I make anything, whether it is tote bags or wallets, it is usually never in quantities less than 25.
You have previously designed CD layouts, covers and designs, and have also designed T-shirt art for the band, The Chinese Stars. How did you become involved in these music projects? Do you find working on projects like this exciting to be a part of?
I love music, so doing work for anything that is musically related is a great thing to be a part of. My boyfriend Eric is a member of the Chinese Stars, so that is how I started doing the t shirt designs for them. I also make pins and tote bags for them to sell at their merch table. Me and Eric brainstormed together to come up with the ideas for the designs. It is a lot of fun....
I have read that you were involved with Ladyfest Bristol here in the UK. How did you become involved with that, and in what ways were you involved? What are your thoughts on such festivals?
The festival seemed like a great idea, and I believe I got involved through Ariel Bordeaux, she was invited to send art and comics to be displayed at the festival. I sent off some minis and a print for display.
Your strip ‘Joe Blow’ is an example of how your work could be described as ‘beautifully minimal’, in its illustrative technique, but narratively it’s actually really complex, touching on issues involving stalking and sexual harassment. Do you think it is important to mix beauty and darkness together, to provide light and shade to strips and comics like these?
Yes, I hope to do work along similar themes for my next story....
What is the significance of the body shapes of the characters in Joe Blow, and Never Ending Summer as a whole? They are humanistic without taking on wholly conventional human forms. Does this allow you more freedoms, or perhaps distance, to allow the characters to act out a range of scenarios and situations? Or is the significance of this drawing style much more simple than that?
Well, I just began drawing in that way for no conscious reason. As I started doing longer stories I slowly realized the benefits and drawbacks of the way that I draw. The benefits are that the
simplified style allows me to make my characters more universal and less distracting- instead the emphasis is on the characters body language and dialogue. The drawbacks are that a lot of people tell me that it is confusing to distinguish who is who in my stories, and I cannot use facial expressions to convey emotions beyond moving the eyebrows and eyes.
What for you are the most enjoyable and satisfying aspects of being an artist?
Being able to work through personal emotions and experiences through making and creating things. I can only hope that every time I make something it might have an impact on someone. If my art only touches one person, that's enough for me.
Posted by Colouring Outside The Lines at 21:08