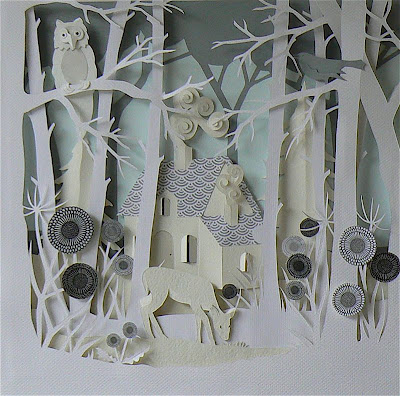 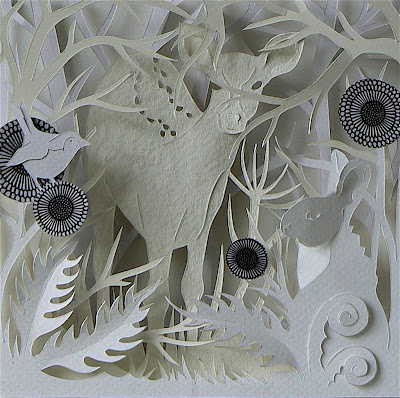 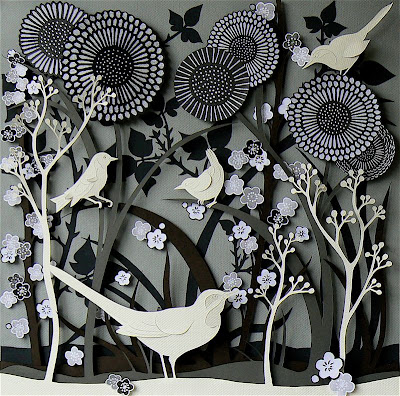 Location: Southern edge of Manchester, UK
How would you describe your art? Paper Sculpture that’s colourful, bold and whimsical
Currently working on: orders for independent shops, commissions through my website and 2 exhibitions
3 Likes: small birds, reading blogs, the smell of roses
3 Dislikes: inconsideration, Turkish delight, plastic carrier bags
Daily Inspirations: The flora and fauna I see when dog walking
People & artists you admire: Picasso, Emile Zola, Alexander Mcqueen, Madonna
Favourite album(s) to listen to when working: I go through phases. Lately I’ve been listening to White Chalk by PJ Harvey, Fleet Foxes, and I like to have a blast of Witchita Linesman by Glen Campbell to send a tingle down my spine. I also listen to Radio 4 a lot


Hi Helen, how are you? What are you up to at the moment?
Just getting used to working in my new glasses! It’s the first time I’ve had to have them and it feels quite odd!

First things first I guess I’d like to ask about the sorts of stuff you like; what images keep you company in your studio / place(s) of work, for inspiration?
I’ve got lots of reference books and back issues of interior/style magazines.
On the wall next to my desk is a collection of cards, postcards (some bought by me some given to me), magazine cuttings, bits of work that didn’t quite turn out as I wanted that might work on another piece, images printed from the internet a picture of a flamingo by my godson which I particularly like. It’s an ever-expanding collection.

What is your artistic history? How did you get started, and how long have you been creating art, embracing your creativity, and working towards developing your current style and output?
I did an art foundation course followed by an OND and Hnd in graphic design and then worked in a design studio for a few years.
I also used to make and decorate small pieces of furniture from MDF which I sold to independent shops.
I then spend a few years working for a jeweller making rudimentary sliver and gold jewellery and as an art technician in a school.
Then in 2006 after relocating to Manchester paper really began to work for me.

Where did your skills and interest in paper engineering come from?
Whilst making jewellery, I used to make paper models of some of the pieces I wanted to make and I was also in charge of the widow displays at the jewellers which I made from paper too.
I quickly realised that paper was a fantastic medium and a lot cheaper than gold and silver!
I made a couple of box frames and assembled an all white woodland scene with a stag, a doe and an owl and a group of butterflies around a flower took them to local shop and the rest is history!

Were your artistic endeavours encouraged from an early age, perhaps giving you a sense of perspective over your productivity and its worth?
Yes, more than anything I used to love getting a new pad of paper and a pack of 30 felt tip pens (which I had to arrange in colour order starting with black which was my favourite and finishing with yellow) My mum was always making things when I was young from a bookcase to clothes to furniture for my Sindy house and I think her creativity and originality inspired me from a very early age. Ours was a “making” house.

What role does artistry and creativity hold in your current everyday, day-to-day life?
It is the majority of my waking hours!

The majority of your art takes nature as its main subject, whether this be flowers, hedgerows, woodland, birds, plants, rabbits, etc.
There’s something very ‘British’ about your work, in this sense; documenting everyday native scenery.
Do you think your current environment, as well as the environment in which you grew up influenced this subject matter?
Yes very much.
I grew up in the countryside; my dad was a farm worker so it always surrounded me.
I did go through a teenage rebellion phase when I hated it for a few years but after art college in the city I gravitated back.
Now we live with 1 foot in suburbia and 1 in the countryside which seems to work very well, although I do have a yearning for a cottage on the edge of a village which is where I began!

You have stated that your work is influenced by Folk art and Mid-century design. Where did your interest in such art forms come from, and what in particular moves you about them?
What correlations do you personally see between your own work and these design and art forms?
My interest started at art college learning about art and design history.
Once I discovered The Bauhaus and the movements that came afterwards it all clicked.
I like the simplicity of mid century design and the ornate/decorative nature of folk art and the connections which exist between them. I have a love for both and like them to exist together
In my work albeit subtly.
I admire the beauty of simple, intelligent design but I can’t resist colour and pattern. I try to reflect this in my work but I have a leaning towards decoration so simplicity often loses!

How important do you think it is to include and represent traditional art forms like Folk Art in contemporary art work?
Its really important because folk art is a form of social history and it’s universal in the stories and tales of life it portrays. Every country has them, and they need to be kept alive.
They are often intricately linked with the countryside and the seasons and use simple materials.

I am very interested in how and where women gain access to their own confidence, and self-belief -- especially in terms of how they are able to produce and create with a sense of assurance, belief and certainty.
What is your personal relationship with confidence?
It came to me in my early thirties I think, when I had been working for myself for a few years, doing something I loved and believed I was relatively good at and its grown over the years.
I also have to say that the encouragement and belief that my partner Andrew has had in me
Has definitely helped to boost my confidence.

How would you describe your artistic techniques and materials; what processes does your work go through to reach a ‘finished product‘?
And how long would it take to complete a typical scene?
It’s hard to say how long a typical piece takes as there are always distractions and I quite often go back and add things.
I start with a little sketch and quite often enlarge that.

With the time it takes to create each individual, one off piece, what strategies and techniques have you learned or adopted in order to keep motivated, maintain concentration, enthusiasm and momentum, and be self-disciplined? As I for one know that keeping perky and focussed on long projects can be tough!
I write lists all the time and when it all gets a bit too much I take my dog for a walk to clear my head and think about what I have to do, the most important thing I discovered not to do is panic!

What are your interests in fairytale mythologies, and why did you decide to weave these ideas into your artistic work?
I like fairy tales and folktales because they are fanciful, slightly dangerous, from a more simple age and have a morality and message which is universal and relevant today.
I like the idea of escaping into a world like that, not forever, just at certain times.

How important is the role of ‘story telling’ in your artwork, especially due to this element of fiction, fairytale and folk tales?
I make up little stories when making some pieces and I’d like the viewer to do the same.

How prolific an artist are you?
Do you find creating work to order, or to meet specific deadlines creatively useful, or restricting?
I seem to be very prolific at the moment, I have lots of ideas that I draw quickly and sometimes use straight away or store for the future.
I do like deadlines as they make me work more efficiently and effectively.
It can be frustrating though when I have a new idea and have other work to finish before I can start on the new idea. I have lots of ideas that often take months to manifest into work I’m happy with and had envisaged when I first had the idea.

What are your thoughts on the nature and exclusivity/inclusiveness of ‘art’ -- Do you believe everyone can be creative in their own life?
Art and creativity has many levels and is a very personal thing.
Every one has some it just manifests its self in different ways, whether it be professional or a hobby.

You are a member of the Manchester Craft Mafia. How and why did you become involved with this?
I became involved primarily to meet other like mined people in the area and to meet periodically, it’s a loose collective of people but we’re there for moral support, professional help and a social time too!

A lot of your work is sold in local, independent galleries and stores.
Do you feel that such independently owned stores, spaces & settings are more suited/more fitting for your artwork?
Yes definitely. My work is the antithesis of mass production but at the same time quite commercial and I find that independent shops and small galleries and their customers understand this and actively seek out original work.
Local is important too but I do sell all over the world which is important in raising my profile.

Do you enjoy exhibiting in group shows?
What have your experiences of exhibiting nationally and internationally been like in general?
I have exhibited in lots of small group shows and I like the diversity that comes with a group.
I have always had good experiences with the shows I’ve done.
The galleries and their customers have been very positive, especially in America!

What is your favourite part of artistic creativity? Why do you keep on going and doing what you do?
I just like to make/create. I like the whole process really, I get immersed into it and get annoyed when life gets in the way!
I had a hiatus a few years ago when I got a proper job for a few years and I really think it helped me to focus on my work now and realise how important it is to keep making and evolving my work.
Posted by Colouring Outside The Lines at 00:08

Hi Melanie - really like this artist's work - as well as being paper sculpture I feel it's illustrative too - must have taken ages! Like your blog content too!